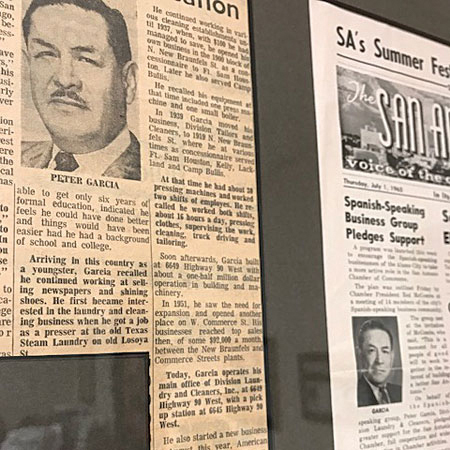 Besides laundry, one thing has remained constant in the business over the decades: the Garcia family.

Leading the way is Patrick R. Garcia, the current president of Division Laundry & Cleaners. Son of company founder, Peter, he started working for the company at age 13 during the summer months and has worked his way up through the ranks.

“The benefits with a well-oiled family business is to establish continuity so that our customers will trust their future with Division Laundry being their linen service provider,” says Garcia. “We have a long, respectable track record with customer retention in the high 90%. We have many customers with close to 40 years of continued service with Division.”

He can say Division is a “well-oiled family business” because the Garcias won the 2018 San Antonio Hispanic Chamber of Commerce Family Business of the Year Award.

“These phenomenal business and community leaders positively impact our community and ensure the vitality of San Antonio’s economy through their work every day,” says Ramiro A. Cavazos, president and CEO of the chamber. “It is a humbling honor for us at the San Antonio Hispanic Chamber of Commerce to be able to provide recognition to such incredible leaders.”

“Incredible” is a good word to describe the Garcias and Division Laundry.

Garcia says Division came into existence because of what was known as the Mexican Revolution in the early 1900s. His grandparents, Florencio and Celsa, fled Mexico to take refuge in San Antonio after raids on their farm.

The pair had 17 children, 16 of which they placed with family members away from the violence in rural areas. Youngest child Peter, born in 1911, accompanied them to San Antonio, where his entrepreneurial spirit flourished.

“My father lived out his dream, from shining shoes and selling newspapers at 8 years of age on the streets of downtown San Antonio, an immigrant from San Luis Potosi, Mexico, with only two and a half years of formal education in San Antonio,” Garcia says.

Peter’s American business dream turned to laundry in 1939 as a one-man operation inside Fort Sam Houston, laundering uniforms and sewing on stripes for troops.

“Those were scrub-board days, hang-to-dry and hand-ironing days,” Garcia shares. “It wasn’t long after that his father loaned him $100 with which he purchased his first laundry equipment and hired his first four employees. The social and economic environment then wasn’t exactly friendly to Latinos and people of color. He sponsored his sisters and a brother and gave them jobs in the laundry for many years.”

Peter dedicated his life to serving the military, and the name “Division” came from the 2nd Infantry Division at the post.

Besides providing Peter entrepreneurial success, Division blessed him personally. He met Patrick’s mother, Cecilia, when she was a garment checker with the company. The two married in 1952.

Cecilia also worked her way up in the company, from garment checker to bookkeeper, to becoming a board member in 1958. She served as vice president from 1958 through 1986, and in 1992, Cecilia became president of the company.

Division and the Garcia family have weathered many storms over the years, from the family’s escape from the violence of the Mexican Revolution to business challenges.

While the company’s early years were dominated by military contracts, that business was lost in 1971, but Division made the move to hospitality and healthcare laundry. Garcia says the company grew in the new markets because of Peter’s commitment to quality service, which he instilled in his employees. The company even regained military laundry business in the late 1990s.

“My mother directed me to rebuild Division Laundry after the fire that devastated our plant,” Garcia recalls. “For the next two years, I directed the rebuilding, shipping our customer’s linens to other laundries locally and throughout the state of Texas. Our accounts consisted of 20 hospitals from San Antonio and Austin, a 500-room hotel and linens from all of San Antonio’s military bases, altogether consisting of over 12,000 beds.”

Division employs around 350 employees, operating two shifts, seven days a week. The company has a fleet of tractor-trailers, 24-foot box vans and a few smaller trucks for delivery.

He says that the San Antonio plant strives to employ environmentally responsible practices. These practices conserve water and reduce costs.

Division has won numerous awards for water savings, Garcia shares. Since opening the new plant in 2003, the company has saved more than 15 million gallons a year from the San Antonio Water System (SAWS). The company won the Water Excellence Award from SAWS for the best environmental performance as a large wastewater.

Garcia says the company has also received awards from Randolph and Lackland Air Force Bases for the Best Small Business for Service Industries.

Division has won numerous awards for business and environmental sustainability. Garcia has made a point to follow his father’s edict for quality service, along with being involved with many area organizations.

“If it hadn’t been for the League of United Latin American Citizens, of which I was a member of the Local Men’s Professional Council, I would of never have met my wife, Mary Helen,” he says. “We were blessed to have and raise our three children, Patricia, Patrick Anthony and Teresa, who have earned their positions in the company.”

Earning a spot in the family business means the Garcias have overcome many daily hurdles, both in the business and in being a family.

“The challenge faced in working with family is how to overcome the daily stress and to be able at the end of each day to be able to give each other a hug or a smile and exchange the words to prepare for the next day’s challenges,” Garcia says.

Exchanging words, he says, includes weekly meetings with the maintenance evaluation team to cover all areas of equipment performance or failure, safety projects and maintaining a parts department inventory where the company has invested hundreds of thousands of dollars to keep the operation viable. Garcia adds that his son-in-law has built the part department into the envy of the industry.

Then there’s the management meeting with day and night management every week, he says, followed by weekly overtime committee meetings with senior management to stabilize production overtime. Driver and fleet management have weekly meetings, and a once-a-month meeting takes place with all drivers.

“The challenge is to keep the family well informed covering all aspects of the operations and to be patient and to build our knowledge as we move forward,” he shares.

The corporation is set up for a smooth transition with the proper corporate structure in place to avoid any type of business interruption, he says. He adds that the business will continue to be family owned with hopes that his children and grandchildren will continue the business.

“I currently have one granddaughter, Emma Ann, who is 3 years old and has already set foot at Division Laundry,” shares Garcia. “[She] has a spot at her mother’s (Patty) desk and knows the word ‘office’ and ‘work.’”